Wayne and I were just discussing awkward childhood moments, those slivers of time where you’d prefer to be the floor of a New York taxi cab rather than yourself.

Sometimes, they are the product of your own stupidity. Trying to pass sensitive boy/girl notes in class, ill-advised spiral perms, and belting out “Electric Youth” into a hairbrush while standing in front of an open window wearing nothing but a bra and shorts all fall into this category.

Other embarrassing moments are also your fault, but they come as a result of your ignorance rather than outright imbecility. For instance, I once vociferously uttered the phrase “F%$# It” in McDonald’s, completely unaware of the verbal malfeasance I was committing. In my defense, I was eight and had come across Robin Williams’ A Night at the Met a week before. He said the word quite a bit during that performance, and I liked the sound of it. I was nothing more than a parrot, an obnoxiously red and horrifyingly boisterous parrot for my poor mother. I just remember the beating…and not getting the McNugget Happy Meal I was promised. There was supposed to be a Thundercats toy in it. Yes, epic fail all around on that one.

Childhood also wouldn’t be complete without embarrassing moments you must endure but never asked for, didn’t bring on yourself, and likely didn’t deserve. You know, those “Ralphie in the Bunny Suit” moments? I have several of these from all levels of my elementary and secondary education. I even have photographic evidence of one of them. Ladies and gentlemen, I give you…”Hickety Pickety, My Black Hen,” my kindergarten theatrical debut. 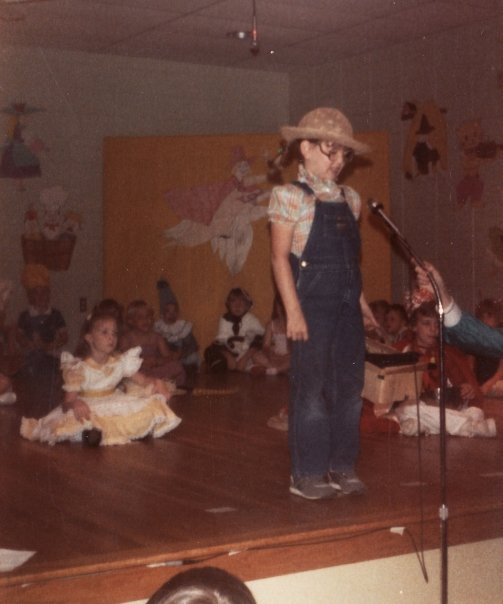 Yes, in our “Mother Goose Nursery Rhymes” school play, I had to recite the following lines:

You can tell by the zombie-like expressions on many of my classmates’ faces that none of us was thrilled to be there in costume sitting criss-cross-applesauce on stage. I, however, had to bear the burden of showing up dressed like an extra from the first episode of The Beverly Hillbillies. A straw hat, overalls, plaid shirt, and what looks to be a pair of Velcro-closure Pumas complete my resplendent costume. I’ll not even mention the Strawberry Shortcake  glasses I have on. Those things are traumatic enough for another post of their own.

My teacher, doing a wicked impersonation of Thing from The Addams Family, is likely lowering the microphone so I can deliver my Shakespearean-level verse to the illiterate masses huddled in the Woodrow Wilson Elementary School gymateria/cafetorium.

What makes this moment so gut-wrenchingly embarassing is not the fact that I’m being forced to deliver my lines in front of people or that I am so ridiculously dressed (though both of those factor into this being the worst moment in my life up until this point). See that girl in the yellow dress? She’s going to be the symbol for all that was wrong in my six or seven years of existence. I have no clue who she was supposed to be, but she got to wear a frickin’ adorable yellow dress. My cousin, April, was Betty Blue and wore an even cuter cornflower frock. She’s somewhere to my right…no doubt looking adorable with her curly blonde hair done up in princess ringlets and two patent leather “holiday shoes” on her feet. Already awkward and tall for my age, the only thing I wanted more than to NOT be on that stage was to be lovely on it. Alas and alack, that was not in the cards for me.

I should have expected it. For instance, whenever April and I received dolls as gifts, she got Barbie—ostensibly because she has matching hair. As a brown haired, brown eyed girl, I got Barbie’s friend Kimber, P.J., or Steffie (or some other doll with an equally bubblegum pink name.) Yes, I was forever relegated to the posse (even by my own family) because of my mother’s dominant genes. Being Hickety Pickety didn’t help matters much. However, it does shed some light on why I’ve had a longstanding and inexplicable hatred of eggs….

Okay, so I have to ask. What are the most embarrassing moments from your childhood that you didn’t cause but had to endure with Herculean resolve?

Also, if you could go back and save yourself one of those “Self-Induced” moments of shame, which one would you choose and why?