It’s been two weeks since Donald J. Trump was declared president-elect of the United States, and while things have calmed down slightly, we’re still a far piece from that “perfect union” our Founding Fathers envisioned.

The night after the election, the hubs and I went on a date. (Yes, on a Wednesday. And we paid for it the next day. Oh brother, did we pay for it.) Why put ourselves in such a spot? Because when Madeleine Peyroux is playing City Winery, you go regardless of what day it is. (If you’ve never heard of her, are you in for a treat. I’ve included one of my favorites below to get you started. You can thank me later.)

During the fifth or sixth song in her opening set, the woman sitting in front of me—a striking older beauty in a cream colored sweater and smart cloche hat—nearly knocked her glass of merlot over. Without thinking, I reached over and caught it. (Old waitress reflexes never die apparently.) Smiling, she whispered her thanks, and I leaned in to tell her it was my pleasure. I suppose that little act of kindness unlocked something in her because, without warning, she turned to me and said in a much louder voice, “I don’t know what to do about this election. I don’t understand it! I’m worried about our safety and the economy and immigrants….”

I tried for the better part of sixteen bars to get her to speak more softly, all to no avail. People began looking at us, shooting very polite darts in our direction. The more she talked, the more overwrought she became, so I went for the obvious. “Darlin,” I told her, “there are worries out there to be sure. But for now, you have lovely music, the company of friends, and a glass of wine in your hand. Leave the rest outside for an hour or so.”

She smiled at me—soothed by those words—patted my hand, and turned back to the music. We didn’t speak again until the end of the show, but before I left, I put a hand on her shoulder and gave her the only truth I knew: “The person in the White House, whoever it is, doesn’t impact you all that much really. You can still love your neighbor. You can still show kindness to others. Nothing can stop you from trying to impact your world for the better.” I could tell it helped her to hear someone say it, and truth be told, it lightened my spirits to give the thought voice. It’s been hard for me to deal with this election, even knowing what I know as a Christian—that this world doesn’t get the final say and that, praise God, there’s a better one coming. As believers, we play the long game. But that doesn’t stop us from losing sight of the truth…or from losing our good sense once in awhile.

I’m sure this is somehow a steal from Wendell Berry (who has already said most of the good things worth saying), but I’m of the belief that we aren’t meant to solve all the world’s problems. It’s our job to faithfully tend the little corner of earth assigned to us and nothing more. We are to love and aid those around us, to care for the parts of the world we call home, and if we all pitch in and do our bit, all the little corners will get tended. That’s what I was trying to tell her—the woman who was my neighbor for the briefest of moments—that it’s all going to be okay.

In Life Together, Dietrich Bonhoeffer writes, “It may be that the times which by human standards are the times of collapse are for [God] the great times of construction. It may be that the times which from a human point are great times for the church are times when it’s pulled down. It is a great comfort which Jesus gives to his church. You confess, preach, bear witness to me, and I alone will build where it pleases me. Do not meddle in what is not your providence. Do what is given to you, and do it well, and you will have done enough…. Live together in the forgiveness of your sins. Forgive each other every day from the bottom of your hearts.”

Read that last bit again, “Do what is given to you, and do it well, and you will have done enough.” Mercy, I can do that. I can try. That gives me a little room to breathe and puts things back in the right perspective. From that point of view, the world doesn’t seem quite so dire. A thought like that pushes the bleakness back.

The next morning as I drove to work, bleary-eyed and droopy from a night spent gadding around like a college kid, I saw something out of the corner of my eye that gave me even greater cause for hope. It was dark, so I couldn’t be quite sure of what I saw. But it gave me something to think on and daydream about all day. That afternoon, I beat the same worth path home, excited to find out if what I’d seen had been real or some kind of mirage, one created by wishful thinking rather than thirst. And much to my surprise and delight, I saw it was real.

Some lovely soul took the time to make a sign that simply said “Love People and Be Kind” in chunky black marker. Someone else had thought the matter over, come to the same conclusion as I, and had taken the first step by posting this advice on a busy Atlanta road. I look for it every day now, and it never fails to bring me joy.

There is a way to not just to survive the hot mess that is 2016 but to thrive in it. And the solution has nothing to do with a non-profit initiative, a protest march, or a government program. Each of us is called to do those two simple things. If we do justice, love kindness, and walk humbly with our God, there’s precious little else that needs doing because, well, we will have done enough. 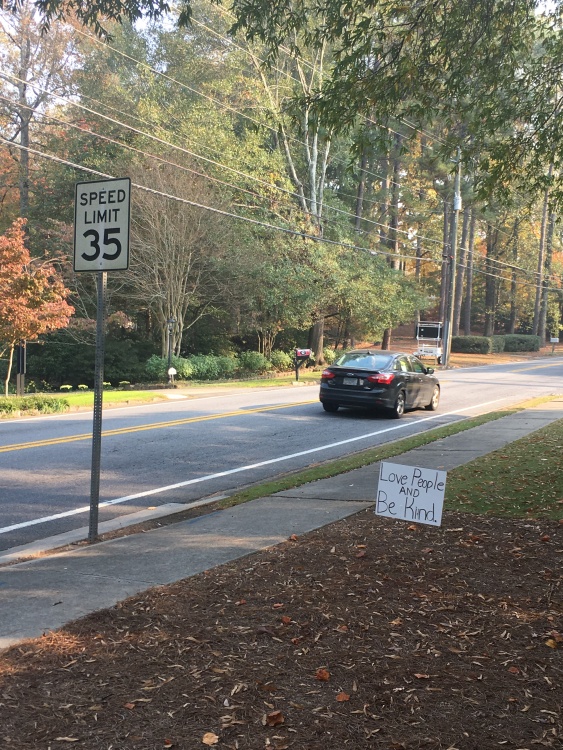