I’ve run across some fairly awful grammatical, spelling, and stylistic errors in my time, but most of them were made by teenagers—people (hopefully) still learning how to write well. However, thanks to meme generators, e-card makers, and other innumerable sites that allow people to create their own images, we’re now caught up in a tsunami of awful writing. And the worst part is, no one seems to notice. How do I know? Because they create and share the stuff without a second thought. Take this one for instance.

Someone tagged me in this one on Facebook because I’m a St. Louis Cardinals fan, and while I appreciate the sentiment, I can’t get over the fact there are two errors in this card. First off, “that” is the incorrect relative pronoun; it’s typically used for objects, animals, things, and groups. For instance, you could say, “The bees that stung me are in a hive up that tree.” Girls who love baseball (in addition to being awesome) are most definitely not objects. Hence, “who” is the correct relative pronoun in this case.

There is also a glaring run-on sentence that could be fixed by placing comma right in front of the “and.” Brother, if I had a nickel for every time I’ve added one of those to a sentence for someone, I could pay to house Mark Harmon in a manor on the English moors and make him pretend to be Mr. Rochester for my literary amusement.

And then there’s this one that makes me despair because it’s a witty observation ruined by a single incorrect letter.

A “suicide pack”? Seriously? It would have taken two seconds to check the many meanings of “pack,” none of which is “an agreement, covenant, or compact.”

I’ve taught English for more than a decade. I know the English language can be an aggressive, hairy she-beast sometimes. It is unwieldy and hard to train, but the Internet has made it so much easier to prevent errors like this one. Back in the 80s when I was wee, I used to think the phrase was “for all intensive purposes,” and I was roundly chastised by a teacher (in front of the entire class) for writing it that way.

Today, I would simply look it up on the good ole’ world wide web, correct my mistake in the privacy of my own home, and save myself the public shaming. It also would’ve saved Mrs. Wilcox from an afternoon spent wiping up a bottle of liquid  soap off the bathroom floor. (Hey, she brought it on herself. I just worked out my feelings with the tools that were available to me. Don’t judge.)

There are teeny tiny errors that make exactness impossible…. 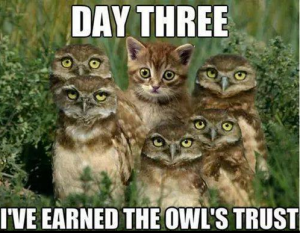 Which owl trusts the cat? We’ll never know. (My money’s on the one to its right. He looks pretty content with the state of the world.)

And there are enormous errors that make a sentence’s true meaning completely indiscernible.

The way this sign reads, the only person who can hope to take a leak in this facility must be disabled, elderly, pregnant, and a child. I could see someone being elderly and disabled. That’s easy peezie, lemon squeezie. Disabled and pregnant? Sure, that’s plausible. Elderly and pregnant? Hey, it happened to Sarah. But the only person I know who could combine “elderly” and “child” is Benjamin Button, and even he couldn’t be both at once. So while the owners of this store are very excited about you shopping with them (hence the “THANK YOU” written in all caps), the bathroom is verboten to all patrons, even those who meet some of the qualifications. We all know what they meant, but that’s not what they said.

And then there are errors that just make me wonder what the heck is going on with the public schools these days.

People with a limp-wristed grasp of grammar always claim, “I know it’s correct because it sounds right to my ear.” I hate to break it to you, but your ear is only as good as the stuff it hears. So if you’re surrounded by yutzes “that don’t talk good,”  chances are you aren’t going to either. Your ear is deceitful above all things and desperately wicked.

I know verb tenses can be treacherous, like staircases in Europe, but the correct one is easy to discover. And, let’s face it, “I would have came” is as awkward on the ears as a rousing chorus of “Let It Go” performed by precocious children. “I would have come,” on the other hand, is pure bliss, the auditory equivalent to a glass of ’47 Cheval Blanc. Besides, why would you trust a person who spells wisdom with a Z?

If people can ask pressing questions like “Why does everyone I know like ‘The Walking Dead,'” surely, they can ask “What does suicide pack mean” and discover their word choice is flawed. So simple. And it would make the world (at least my corner of it) a little better.

But I’m totally with the people who asked Google about Loki. I can’t figure out why the sight of Tom Hiddleston drives some women to self-immolation. Seriously, he looks like he should be playing D&D in his parents’ basement and working at Sbarro.

I don’t even know if Google’s algorithms can solve this mystery.

What do you think? Is good grammar dead and gone, or can it make a comeback? I’d love to hear your thoughts on the sad state of American English. However, if there’s an error in this blog, don’t point it out. Keep that little gem to yourself. 🙂