Tell me if this sounds familiar….

One kid has a toy. The other kid wants that toy. Kid two whines and complains incessantly, trying to get what he wants. Kid one protests and tells kid two to leave him alone. Drama escalates. You get dragged into it. People scream. Nothing is resolved. Everyone is stressed, and the toy that started the brouhaha has been forgotten in the fracas that ensued.

My husband and I used to try to be diplomatic in such moments. We attempted to get them to share, to take turns, to negotiate and find a solution to the problem themselves. Sometimes, that worked, but there are days when no amount of talking it out, no amount of stone cold logic will solve the problem. On those days, I institute what I’ve come to call the “Occam’s Razor approach to parenting.”

Never heard of it? Let’s start with a little history.

The principle was created by William of Ockham, a Franciscan friar who lived in the 14th century. A philosopher and theologian, he wrote about logic, epistemology, natural philosophy, political philosophy, metaphysics, and ethics. Though he wrote a great deal and taught at the University of Oxford, he is best known for his principle called Occam’s razor. Basically, it states that “entities should not be multiplied unnecessarily.” Some Latin versions read like this:

In other words, all things being equal, the simplest solution is best. 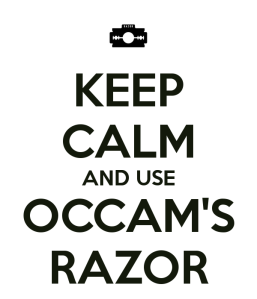 Now this applies in different ways in the sciences, technology, and philosophy. But it’s application to parenting is simple. Take the case I mentioned above. Rather than waste time fighting or trying to reason with children, I choose the simplest solution. In this case, taking the toy away from both kids. Problem solved!

Kid doesn’t like food? Don’t serve it to him. (We often place a bowl of plain oatmeal in front of the offender on this one. Helped cut down on kvetching pretty quick.)

Can’t agree on what movie to watch? Don’t turn one on.

Fighting over Pokemon cards? Catch ’em all yourself!

One kid accuses the other of cheating at a board game? Pack it up.

Kid doesn’t listen to you because he’s looking at a tablet? Take it, and give it back only when you feel like it. Or, simper and better still, don’t buy a tablet at all.

As you can see, the applications are limitless.

I can hear your objections already. “That’s not fair,” you’re saying. “Why should kid one go without the toy? He didn’t start it!”

You’re correct. I am punishing kid one to an extent. However, if you parent more than one child, you know that they change roles constantly. There are days when kid one is the whiner, the beggar, the aggressor and kid two is the aggrieved party. (Only Mary and Joseph had a perfect kid that didn’t start anything.) If both kids know that something they want can be taken away because of dickering, both are less likely to start a fight. With us as the common enemy, the boys have a reason to put those negotiating skills to use, which is what we were trying to get them to do in the first place. This principle has cut the drama in our home down by at least half, and we’re all happier for it.

How about you all? Do you handle things a little differently when the kids start tearing each other’s throats out? Thinking about trying this method? I’d love to hear your feedback, so leave me a comment! 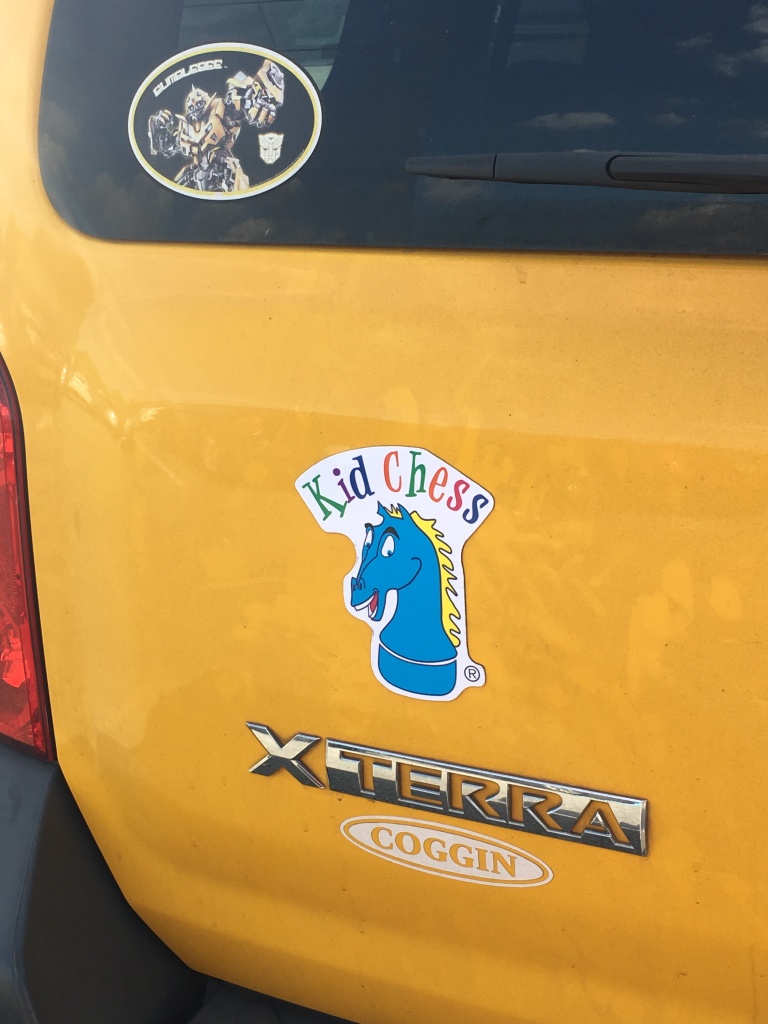 At first glance, this magnet on the back of my car is nothing special. It’s hardly as cool as my “Team Oxford Comma” sticker or the logo of my beloved St. Louis Cardinals. Heck, even my Valdosta State University alumnae badge of honor is more unique. 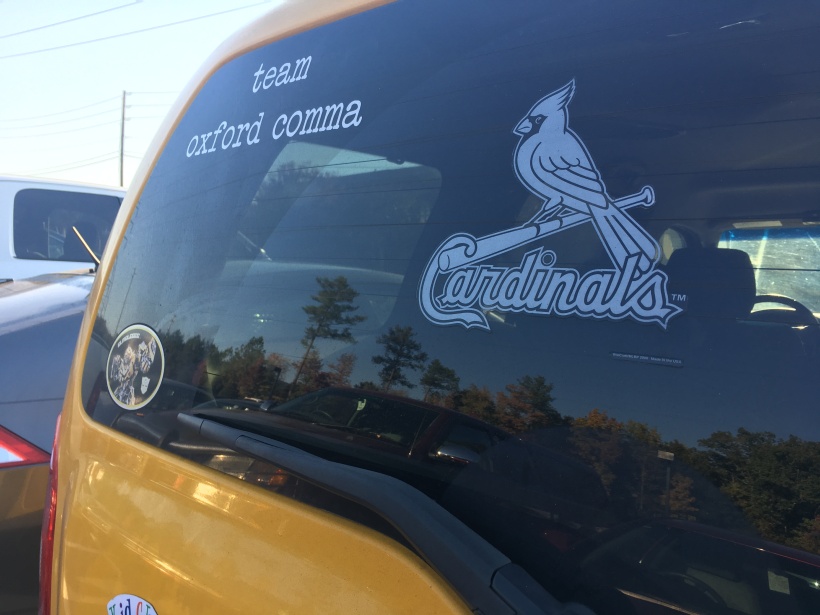 Like hundreds of other folks in the place a call home, it indicates that I have a curtain climber or two involved in an afterschool activity known as, you guessed it, “Kid Chess.”

Each Tuesday, our dastardly duo finishes their school day and heads for the cafeteria to learn about “the immortal game,” beloved by commonspun philosophers, kings, and titans of industry. For ninety minutes, they learn strategy and play a game or two with classmates on the same skill level as they. Some weeks, the boys sprint out, their faces flushed with the thrill of conquest. Other times, they more closely resemble Eeyore, the beloved sad sack of the Hundred Acre Woods because they’ve been beaten like a tied up goat. But I’m happy either way because they’re learning how to think critically, to be good sports, and to take risks.

But that’s not what makes that goofy blue knight sporting the Def Leppard do so special.

When we were going through the adoption process—filling out mountains of paperwork, taking IMPACT training classes, and meeting with advocates and case managers, every so often, I would think to myself, Do we REALLY want to do this? Are we sure that we’re sure about this life-changing choice?

Most times, the answer was yes. But there were days (more than I care to admit) when I backpedaled from the entire thing. Days when I heard adoption horror stories in the news or from the mouths of well-meaning friends. Days when I came home exhausted and realized just how difficult life could be for a working mother. Days when my selfishness overruled my willingness to obey.

I prayed for peace about what sometimes seemed like an altogether foolhardy endeavor. I asked for confirmation from God, some grand symbol like the ones he gave Moses in the wilderness or during Belshazzar’s feast. Heck, I decided I’d settle for a little dew on some fleece. But the Lord, as we all know, is not in the earthquake, fire, or whirlwind. It’s the still, small voice we should be listening for, the gentle question that comes to us from just outside the safety of our caves.

Days before our paperwork was approved, I was still wrestling with adoption and with all the worries and expectations that are part and parcel with becoming a new parent. But driving home from work one afternoon, I saw a car with one of those silly magnets on the back, and I found myself saying, It might be fun to raise a kid who plays chess.

Just like that, I went from worrying about all sorts of things (most of which have not come to pass) to thinking, It might be nice.

And now—one year after children were placed in our home—that magnet is proudly on display on the back hatch of my filthy yellow car. Evidence that God is indeed at work in the details.

Well, here it is—my first ever Q&A! It appears in the June issue of In Touch Magazine, which can be viewed by clicking here. The entire magazine discusses the idea of success for people of faith. After all, what the world calls “successful” and what we believe it to be are often antithetical.

Dr. Kathy Koch of Celebrate Kids, Inc. was kind enough to allow me to interview her by phone to discuss how to raise children with a kingdom view of success, to be “in” the world but not “of” it. As a teacher, I know how difficult it can be to raise a child to view things rightly, but I only worked with them a few hours each day. For a parent, it’s a constant battle to instill good values and reinforce them so that, when the time comes for them to leave the nest, they’re able to withstand the pressures and temptations of the world.

My goal for the piece was to allow Kathy to share her knowledge with parents, to both edify and enable them to do what God has called them to do. I’d love to hear your feedback if you’re a parent or someone who’s involved with raising children, so please leave it here or on the magazine page, which can be accessed using the link in the first paragraph of this blog. Also, if you enjoyed this piece, you can subscribe to In Touch Magazine for free by visiting our registration page.