Last weekend, the hubs and I were in New York City to visit the Morgan Library & Museum so I could clap eyes on the original manuscript for Jane Eyre, my all-time favorite book. The exhibit, Charlotte Brontë: An Independent Will, is well worth seeing if you’re in or near the area, and it will be at the Morgan through January 2, 2017. Here are a few snapshots I took while we were there.

A dress once worn by Brontë. Only 4’9″, she was small but mighty! 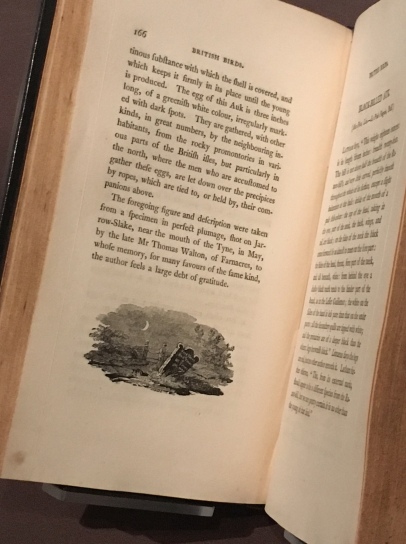 Remember “Bewick’s History of British Birds,” the book Jane curled up with in the window seat? The family owned the book. It was a favorite, and the museum had their copy on display to the page little Jane describes.

A copy of all three Brontë sisters’ books, plus the original manuscript for Charlotte’s last published work, “The Professor.” 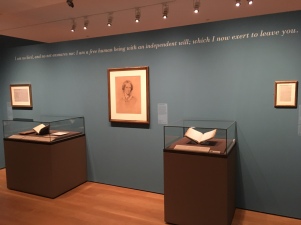 The portrait of Charlotte known to all fans. If you look to the right, you’ll see the original manuscript of “Jane Eyre,” the only object in the museum I wasn’t allowed to photograph up close.

The first book Charlotte ever published, a little adventure story for her sister

There were several other wonderful exhibits there, including Word and Image: Martin Luther’s Reformation in honor of the 500th anniversary of the Reformation. It, too, was a fascinating collection, well curated and solid in scope. From it, I learned a great deal not only about Luther himself but also the men who helped get his message out and the printing press, that revolutionary machine that democratized the Christian faith in Europe.

We finished our day by visiting Pierpont Morgan’s 1906 library, divided into the North Room and West Room—both of which I was too busy ogling to take pictures of—and the amazing East Room that took my breath away. 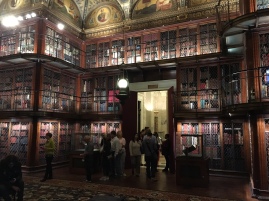 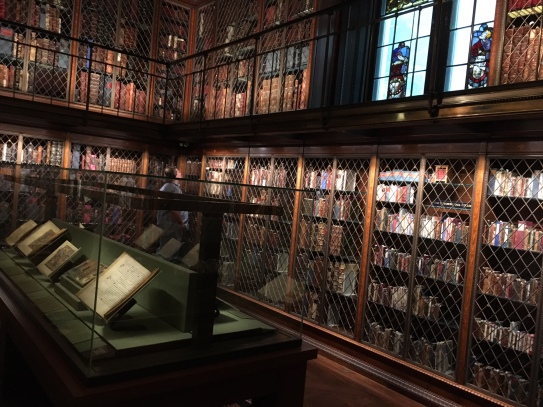 Thomas More’s “Utopia,” one of the many treasures on display

A letter written by Frederick Douglass 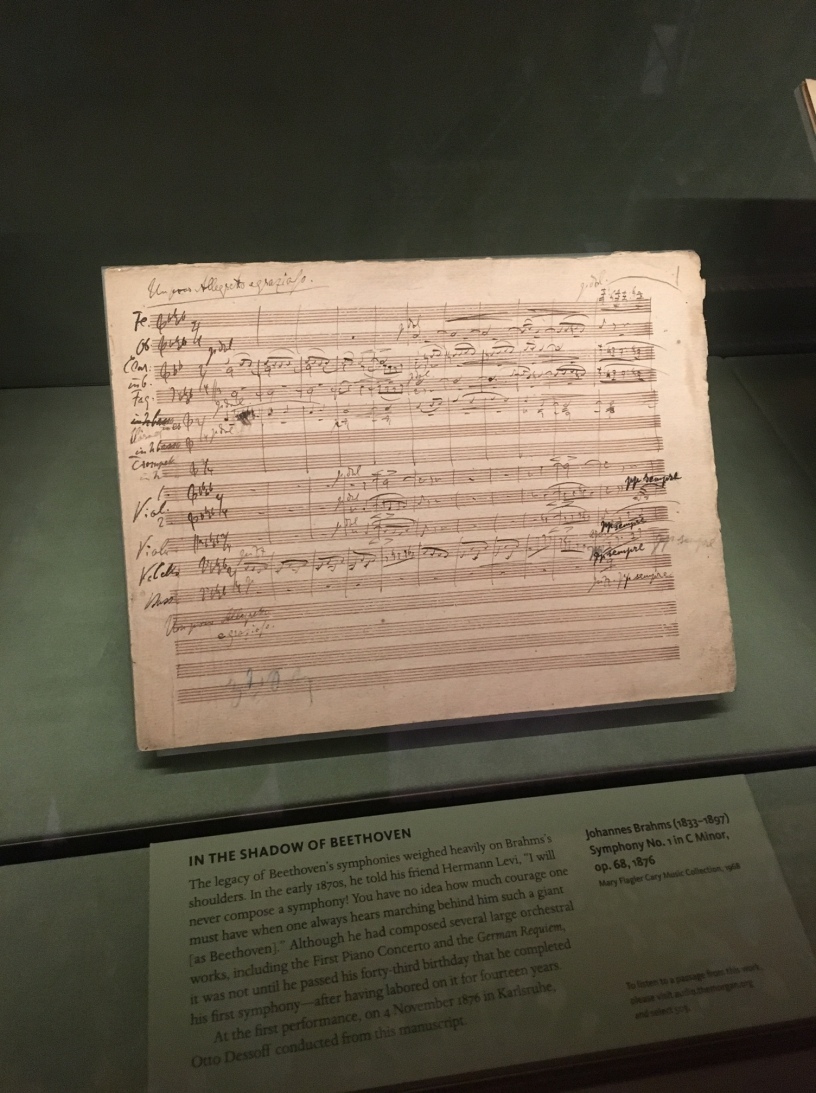 A score by Brahms

But it was in the rotunda, a dazzling space of marble and light that divides the libraries, that I came across something unexpected: a letter written by George Washington on December 25, 1777. As you can see by the paragraph below the document, this wasn’t a document of great import. It wasn’t penned to celebrate the victory at Trenton, the loss at Brandywine, or the British surrender at Yorktown. It was simply a letter written to Elbridge Gerry, a member of the Second Continental Congress, requesting that plans be drawn up for the campaign that would take place at winter’s end. It’s the 18th century equivalent of an inner-office memo, but it stopped me dead in my tracks.

I viewed this document on Saturday, October 8th, less than a 24 hours after Donald Trump’s Access Hollywood video surfaced and only a few days after Wikileaks dumped emails from John Podesta detailing the inner workings of the Clinton Campaign. Up until that moment, I had been floating on a cloud, five hours removed from the outside world and happily ensconced in a beautiful building surrounded by erudition and polite, dignified people. For a moment, I’d forgotten about the ugliness of the world outside the Morgan’s doors, especially the nefariousness that has been the 2016 election season. But, looking at this letter, I couldn’t help but be confronted by it all over again in a way I never expected.

Consider this. Washington was the United States’ first president and served two terms. He did so not because he wanted to but because he felt he must, and when his time of service was over, he surrendered power for the second time and walked away.

Imagine a president doing that now. Imagine Trump or Clinton surrendering authority, doing something for the greater good of the United States. Yeah, I know. It’s disheartening.

Washington was born into a farming family in Virginia and though he was fairly well educated and prosperous, I always get the sense he felt himself an outsider in many ways. Hence, he was always mindful of his manners and comportment. So much so, in fact, that in 1814 Thomas Jefferson said, “may truly be said, that never did nature and fortune combine more perfectly to make a man great.”

There’s evidence of it in the letter at the Morgan. I wish my photo of it was high-res so you could see for yourself, but believe me when I say his handwriting was immaculate. Each line was perfectly straight, every letter was exact. All leaned in the same direction and at the exact same angle. Any letter below the line had identically-sized loops. And he did this on a portable writing desk or rickety table in poor light, likely after a long day. Where did he learn such perfect penmanship? Like so many things, at school and through tireless repetition.

When he was sixteen, Washington’s schoolmaster had him copy 110 Rules of Civility & Decent Behavior in Company and Conversation, and it was a text that informed much of what he did as a soldier, a gentleman farmer, and a politician. As this website says: “Today many, if not all of these rules, sound a little fussy if not downright silly. It would be easy to dismiss them as outdated and appropriate to a time of powdered wigs and quills, but they reflect a focus that increasingly difficult to find. The rules have in common a focus on other people rather than the narrow focus of our own self-interests that we find so prevalent today. Fussy or not, they represent more than just manners. They are the small sacrifices that we should all be willing to make for the good of all and the sake of living together. These rules proclaim our respect for others and in turn give us the gift of self-respect and heightened self-esteem.”

Consider just a few of the bits of wisdom Washington lived by:

Number 40 — “Strive not with your Superiors in argument, but always Submit your Judgment to others with Modesty.”

Number 48 — “Wherein you reprove Another be unblameable yourself; for example is more prevalent than Precepts.”

Number 49 — “Use no Reproachful Language against any one neither Curse nor Revile.”

Number 56 — “Associate yourself with Men of good Quality if you Esteem your own Reputation; for ‘is better to be alone than in bad Company.”

Number 58 — “Let your Conversation be without Malice or Envy, for ‘is a Sign of a Tractable and Commendable Nature: And in all Causes of Passion admit Reason to Govern.”

Number 65 — “Speak not injurious Words neither in Jest nor Earnest Scoff at none although they give Occasion.”

Number 110 — “Labor to keep alive in your breast that little spark of celestial fire called conscience.”

You get the idea.

Thankfully, this man set the standard other men (and perhaps one day women) should strive for as president.

As bio.com writes, “George Washington proved to be an able administrator. He surrounded himself with some of the most capable people in the country, appointing Alexander Hamilton as Secretary of the Treasury and Thomas Jefferson as Secretary of State. He delegated authority wisely and consulted regularly with his cabinet listening to their advice before making a decision. Washington established broad-ranging presidential authority, but always with the highest integrity, exercising power with restraint and honesty. In doing so, he set a standard rarely met by his successors, but one that established an ideal by which all are judged.”

And today, less than 300 years later, we have two candidates who refer to the American people as a “basket of deplorables” and insist that when you are a star, you can grab women by the p***y and get away with it.

But Trump and Clinton didn’t force themselves on us. Both are products of a country who relinquished its ideals, who allowed ignorance to be celebrated rather than rejected, and who stopped actively participating in the grand, messy experiment that is the United States of America. Both he and she fall so short of the standard we should expect of a president–and of ourselves–that I stood before that humble, prosaic letter in the Morgan and cried. For Washington, for myself, and for this beautiful country.

The road back to those standards is a long one, and the return journey will be hard and full of bickering. But walk it we must because it’s our responsibility as a free people. Because as Washington said so beautifully in his first inaugural speech, “the propitious smiles of Heaven can never be expected on a nation that disregards the eternal rules of order and right which Heaven itself has ordained; and since the preservation of the sacred fire of liberty and the destiny of the republican model of government are justly considered, perhaps, as deeply, as finally, staked on the experiment entrusted to the hands of the American people.”

If you would like to read other letters by Washington, I highly recommend this page created by the University of Virginia. This site is also very interesting. 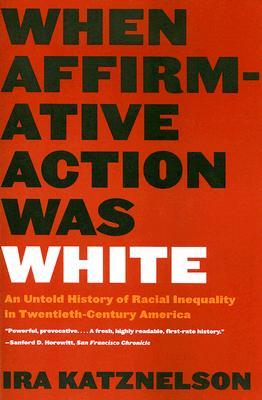